I’m going to show you all the steps I took to make one of my very favourite edits. Its a harder one, BUT! with the right tools and the right amount of effort, you can totes do it too.

The website I use to find all my pictures is disneyscreencaps.com

I start by getting the pictures I need from disneyscreencaps.com. For this edit, the pictures are on page 9, in case this happens :

At the end of the link put a forward slash (/) so I can see everything on the page. I saved the last four photos of Anna sliding down the bannister to my phone (the ones before the armour).

Now I scootch over to the Superimpose app!

To load my pictures, I tapped the two overlapped squares.

For the background, I used the first picture of Anna sliding down the bannister.

For the foreground, I used the second photo of Anna sliding down the bannister.

I chose transform and tapped the button that has arrows like a compass.

In mask, I tapped the settings button and used the paint brush to erase the side of the bannister.

I loaded the third picture and repeated the same process as above.

Tip: I erased the top part of the bannister.

With the fourth photo, I repeated the process a third time (remembering to merge at the end!). Then I loaded the first picture of Anna sliding down the bannister and tapped the arrow button.

Back in mask, I used the brush to uncover the other three Annas and used the eraser tool to cover up all the line messups!

Watch the video below to see the Tutorial!

There are three main characters in Harry Potter: Harry, Ron and Hermione and seven books in the series. The series start when Harry Potter is 11 years old. Harry Potter is the second most popular fantasy book series. Heres one of my favourite quotes from Harry Potter  “I solemnly swear that I am up to no good.”
― J.K. Rowling, Harry Potter and the Prisoner of Azkaban

In The Mother Daughter Book Club there are five: Megan, Cassidy, Emma, Rebecca, and Jessica. There are six books in The Mother Daughter Book Club series and seven in Harry Potter. This series also start when the main characters are 11 years old. a quote from mother daughter book club “Never say ‘I can’t.’ ‘I can’t’ is a limit, and life is about breaking through limits. Say ‘I will’ instead.” ― Heather Vogel Frederick, Pies & Prejudice.

“Miss J Lee, The window near the kitchen” Was written in green ink on the envelope sitting next to Julian’s plate at the kitchen table.

“Whats this?” Julian asked her parents at breakfast one morning.

“Well you’ll just have to read it and find out, won’t you?” Said Julian’s mom with pride.

Julian, a girl of the age of 10 with chocolate brown eyes and hair, looked at the letter next to her plate. She opened the envelop and it said this:

Hogwarts School Of Witchcraft And Wizardry. Headmistress: Angelina Weasley (Order of Merlin, Second Class, Supreme Mugwump) Dear Miss Lee, We are pleased to inform you that you have been accepted  at Hogwarts School of Witchcraft and Wizardry. Please find enclosed a list of all necessary books and equipment. Term 1 begins on 1 September. We await your owl  by no later than 31 July Yours Sincerely, Neville Longbottom. Neville Longbottom Deputy Headmaster

“Oh my goodness! I didn’t realize it was coming up so soon!” Exclaimed her mother.

“Well technically you’re half witch, since dad isn’t a wizard. I guess we should take a trip to go to Diagon Alley to fetch your school supplies! ” Julian’s mom said and suddenly left the room.

“Diagon Alley. Its a little street in London where many Hogwarts students get their supplies.” Said her father.

Julian was surprised he knew about witchcraft and wizardry. Her mother returned carrying a small container of some powder.

“Its floo powder. You can use it to transport to and from locations with a fireplace. I’ll go first!” Her father said, amazing Julian once again.

“Go first? Transport? Where? Now? Oh my goodness. This is so much to take in all at once.”

“Just trust us and and watch what I do and do the same.”

He took a pinch of floo powder from Julian’s mother. He walked over and ducked into the fire place, and bellowed in a loud clear voice, “DIAGON ALLEY!” and threw the floo powder to the ground. Instead of your typical fire colours, the flames were huge and green and swooped her father up the chimney, and out of sight.

“So just like that, Julian! And remember to use a loud clear voice.” The hint of nervousness in her mother voice betrayed her wide smile and made Julian nervous.

Julian took a pinch of floo powder, just like her father had. She was small enough that she fit nicely in the fireplace without having to duck much. Hands trembling, she looked at her mom who gave her a nod. With all of the courage she could muster Julian closed her eyes and yelled “DIAGON ALLEY!” and disappeared.

When she appeared in the receiving fireplace, she saw her dad, beaming proud. Julian barely had enough time to think Mom should be right behind me. before she was violently shoved to the ground.

“Julian!” Her mother scolded as they picked themselves off the ground and brushed themselves off. “As soon as you get to the fireplace — GET OUT OF THE WAY.” Her mom yelled.

“Ya. Now you tell me.” Julian huffed.

Julian realized they weren’t on a street, but in a hostel with a sign that said:

Eh,If you have the pea soup make sure you it it before it eats you!

The thought of being eaten by pea soup gave Julian shivers!

Julian came out of her shocked daze and realized they had walked across the room into a back yard type area. There was a brick wall that lined the back of the room.

Julian felt her eyes widen and for a moment she forgot to breathe.

The bricks dissolved to reveal not a dingy alley like she was expecting, but a street that seemed to to go on forever.

“Welcome to Diagon Alley!” Her mother smiled and spread open her arms.

“Its HUGE!” Julian marveled. Diagon Alley had about thirty shops on, but the one that stood out the most was Honeydukes Sweet Shop. Even the sign was appealing:

Julian was disappointed when but they didn’t go into Honeydukes, but instead a shop called Madam Malkin’s Robes for All Occasions. Julian assumed this was where she was getting her uniform necessities.

“Hello Miss Malkin, how is your mother?” Julian’s mother asked the lady behind the counter.

“Not too well — Oh my goodness! Is this your daughter? She is the spitting image of you, Johanna!” Miss Malkin smiled at Julian.

“Thank you.” Johanna said with an even bigger smile

“So what can I help you with today?” Miss Malkin asked, still smiling.

“We’re getting ready for Hogwarts. Can you help us?” Julian’s mother asked, showing Miss Malkin the acceptance letter.

“Oh goodness! I’ve had so many student in here today I don’t even need to see that. I’ve got the list memorized. Follow me!” Miss Malkin lead them to the back of the store where she went to work measuring Julian.

When a boy Julian’s age came into the store, Miss Malkin charmed the measuring tapes before leaving to tend to the boy. The tapes began magically winding themselves around Julian’s waist, arms and neck.

Julian was so taken by surprise that she let out loud a giggle. She looked over to see her parents laughing at her delight. “I can’t believe you guys kept all this magic stuff from me all these years. Imagine the fun we could have been having. This is amazing!”

Her parents looked at one another and smiled and shrugged.

When the tapes had finished their work, Julian and her parents return to the front of the store to pay. They found Ms. Malkin withthe boy. He had with dark orange hair and green eyes. He looked as if it was taking every ounce of his self control to stand still while Ms. Malkin measured.

“Its hurting me!” Avery whined.

They left and walked a few shops down to one called:

They entered the shop to find a middle-aged man standing behind the counter.

“Hello, Mr. Fray, how are you?” Julian’s Mother asked.

“I’m good, Johanna. How lovely to see you!” He then turned and looked at Julian and said, “I knew when I woke up this morning that today was the day I’d be seeing you” Mr. Fray smiled.

Julian felt those same shivers from earlier. “Really?” she asked.

“Now, lets find you a wand.”  Three minutes later, Julian had been chosen by a beautiful new wand. The wand had a beautiful flowing pattern and was an amazing light brown. Julian was very proud of it. They spent the rest of the day getting Julian’s school supplies. They stopped at Magical Menagerie to get Julian a pet cat.

I’m almost an official babysitter. I will be taking my course on saturday and I’m very excited, partly because I don’t know what to expect!  Its fun to think about being a certified babysitter. Its so close!

Ps: sorry this is so short

These four girls are almost completely different, Casiddy’s a jock , Megan’s a fashonista, Emma’s a book worm but sometimes helps her best friend Jess with helping around Jess’s farm.

I really loved this book and I hope you do to!

I love going on walks with my two dogs, Sloane and Neville. Sloane is a Vizsla and Neville is a Germain Shorthaired Pointer. Great pups!

The Vizsla is a dog breed originating in Hungary, which belongs under the FCI group 7 (Pointer group). The Hungarian or Magyar Vizsla are sporting dogs and loyal companions, in addition to being the smallest of the all-round pointer-retriever breeds. The Vizsla’s medium size is one of the breed’s most appealing characteristics as a hunter of fowl and upland game, and through the centuries the Vizsla has held a rare position among sporting dogs – that of household companion and family dog.

The Vizsla is a natural hunter endowed with an excellent nose and an outstanding trainability. Although they are lively, gentle mannered, demonstrably affectionate and sensitive, they are also fearless and possessed of a well-developed protective instinct. – Wikipedia 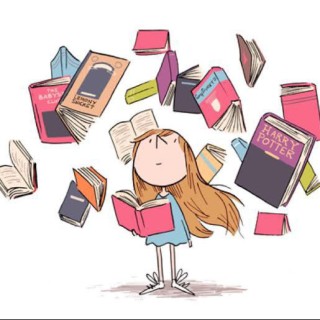